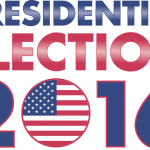 The US election is over, and despite there still being the matter of the official electoral college vote of December 19th to make it a (dystopian) reality, it looks as though the world has got itself a new American president. We say the world, because despite the potential horrors American citizens are now facing in(…)