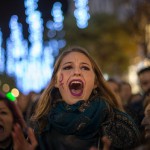 Feminism has been named the WOTY (word of the year) for 2017 by the Merriam-Webster dictionary, and you probably won’t have too hard a time guessing why. Feminism has been huge in the last year, especially with the downfall of powerful figures like Harvey Weinstein, the rise of the #MeToo and #TimesUp movements, and the(…)