Uruguay: Why it Should be on Every Tourist’s Travel List

This entry was posted in wanderlust and tagged South America, Spanish, travel, Uruguay on April 8, 2015 by Heather Keagan . 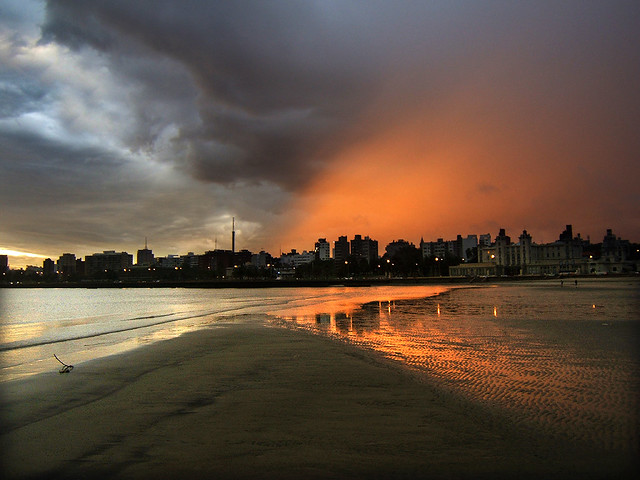 Uruguay, positioned perfectly between Argentina and Brazil, seems to often be overshadowed by its giant neighbours. It ranked quite low on the world tourism scales, with only 2.6 million tourists in 2013. Comparably, it was dwarfed by the United States with over 69 million tourists. But why?

With an amazing amount to offer anyone wanting to travel in South America, and Buenos Aires only a 45 minute flight away, there’s really no reason to skip it!

As a country it is incredibly progressive on a global scale – gay marriage, abortion and marijuana are all legal and in terms of politics, Uruguay notches in as one of the more stable countries in South America. It is expensive, be warned, but the country looks after its own – education is free here, and the president, José Mujica, sets an example by donating 90% of his salary to the poor, earning him the title of  “World’s ‘Poorest’ President”.

It’s also still somewhat undiscovered by many tourists, which means you have the opportunity to see some sights that many others haven’t sullied yet. As it’s currently growing in popularity, we’ve come up with some pretty amazing reasons – in the form of three locations – for you to check out when there:

Montevideo, a smaller city with Spanish and Italian roots, gives the tourist a little European feel. This, mixed with a thriving Afro-Uruguayan community created as a result of Montevideo’s trans-Atlantic slave trading history, makes for an interesting spot to stop. Home to around 1.3 million people the city has a rather run-down persona in many districts, but due to the recent increase in popularity, many empty and abandoned buildings are being turned into niche cafes, art galleries and unique handicraft shops, making Montevideo a bit more hip than haggard.

The city is also host to some amazing festivals, like Carnaval, which happens in late January and is an amazing spectacle to behold. Lasting for over 40 days, it features outrageous masks and dance displays, fantastic street food, parades, and candombe, a type of rhythmic drumming.

While in the capital, check out the Mercado del Puerto, the old port market, which is surrounded by beautiful wrought-iron gates and delicious parrillas (Uruguayan steak restaurants, with fabulous food!). You can watch some street performers, get some nifty handcrafts or just relax with some people-watching.

In the summer this place is unbelievable busy, which is great if you’re into nightlife and partying. Not only that, but it has two vastly different beaches on offer; the Rio de la Plata side or the Atlantic Ocean side, both of which are stunning. One is perfect for those who like to surf, offering awesome waves and generally solid but colder surf, and the other offers calmer seas for those wanting a tranquil swim.

While mainly a South American play place, with many Argentines and Brazilians stopping by for the all night raves, golf courses, and amazing restaurants throughout the summer, celebrities like Naomi Campbell have been spotted in Punta del Este, so keep your eyes peeled for its more famous partygoers.

If you want to, you can even island hop. Isla Gorriti and Isla de los Lobos are quite close to coast, and tours of them are available for bookings. Alternatively, you can simply take in the sites, stroll around, or even check out one of the largest seal colonies that exists in the Southern Hemisphere.

Already speak a little Spanish? Test your level with our free level test!

It may seem quiet and unobtrusive, but that is one of the most amazing aspects of this little gem. It’s not every traveller’s dream spot but if you’re looking for somewhere beautiful to unwind, Salto is your place. Visiting the city means taking it easy and truly getting a feel for rural Uruguayan life. While still relatively untouched by tourists, Salto offers a wide variety of things to see and do. If you’re looking for a relaxing day, the streets provide the perfect environment for strolling around, taking breaks at the occasional coffee shop or stopping in at the odd parilla for dinner. You can also choose to ride horses, go fishing, or enjoy the sights from the seat of your bicycle.

Salto is also home to Termas de Arapey at the Arapey Thermal Resort & Spa, a natural thermal spa that is said to rival the Blue Lagoon in Iceland. Take in the waters here and make it a more holistic holiday, if that’s what you fancy. If you’re looking for a chance to catch up on the sleep you missed while partying in Punta del Este, this should be your next spot.

With so much to do in Uruguay, and so much to explore that has yet to be really seen, you’ll need to speak some Spanish to get the most out of your vacation. Contact us for Spanish courses in your area before jetting off to one of South America’s best (hidden) gems.