Cairo is Egypt’s capital and largest city. This chaotic and multicultural metropolis offers a fantastic mix of old and new that encompass the medieval Islamic section with its never-ending maze of stalls in the main bazaar or souq, the mosques and minarets extending as far as the eyes can see, the exhibitions at the Egyptian Museum with King Tut’s treasure, the upscale restaurants and boutiques, and infinite stalls of street food. No stay in the city would be complete without seeing the Giza Pyramids and the Sphinx up close, or visiting other nearby ancient complexes like the Djoser step pyramid in Saqqara.
Although Islam is the main religion, Coptic Christians predate Muslims and there are beautiful churches scattered around the city, especially in Old Cairo, where the city was originally founded.
As the city grew and sprawled, newer and more affluent districts were created which are now magnets for expats, university campuses, and shopping centers, such as Ma’di or Nasr City.

Why learn Arabic in Cairo? 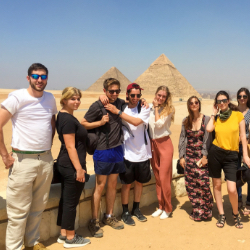 ILI International House Cairo, with over 40 years of experience, offers a wide variety of courses, an amazing mix of students, and lots of activities and excursions to discover the very best of Cairo and Egypt.

Best time to go is November through March.

Ramadan is the Islamic month of fasting, which means that restaurants will be closed during the day. However, the city comes alive at night, with parties and feasts.

The Sphinx is probable one of the most recognizable face in the world. Located just steps away in the neighboring Giza, it needs to be discovered up-close by every visitor.

The Egyptian Museum has, fittingly, the world’s best collection of Ancient Egyptian artifacts. Not only there are hundreds of mummies on display but also the ubiquitous mortuary mask that once covered King Tutankhamun I’s mummy.

Anyone’s first thought when thinking of Egypt is “pyramids” and Cairo has the biggest and most famous ones: The Great Pyramids of Giza are just 15 minutes away from the city center.


Meander around the massive Kahn el Khalili bazaar (or souq) and other landmarks in the historic Islamic sector, including the city’s largest mosques and the medieval architecture of the Citadel.


Get fabulous panoramic views of the city and the river either from a boat tour along the Nile or from the observation deck atop the Cairo Tower.

The Cairo International Film Festival (mid-November) showcases the best of the “Hollywood of the Middle East”.


If you call yourself a foodie, stay until mid-April for Egypt’s largest two-day outdoor food festival featuring the big names in Egyptian gastronomy, competitions, and music bands, attracting over 10,000 people.

Egyptian food shares Middle Eastern traditions and Cairo is no exception. However, ful medames is a typically national dish consisting of cooked fava beans with olive oil and cumin, always eaten with bread or in sandwiches.

No shopping experience in Cairo is better or more exhilarating than heading to the Khan el Khalili grand bazaar, getting lost in the miles of corridors and practicing your haggling skills.

"I have taken 2 2-week courses there, studying both ECA & MSA. I learned a lot and enjoyed the classes. I recommend this school highly!”

"This is a great way for connecting with folks from many different walks of life. Learning is fun and exciting in that environment.”