It would be hard to find someone, anyone in the world, who doesn’t know at least one thing about New York City. The city has acted as a movie set for decades. Its skyline has been in everyone’s mind for one reason or another. Its main landmarks are in people’s bucket lists around the globe. Places like the Empire State Building, the Brooklyn Bridge, the Statue of Liberty, Times Square, Wall Street, amongst others are known to both locals and foreigners. Over 200 languages are spoken in NYC making multiculturalism a fact that the city takes pride in and at the same time, boosts the ethnic influences in the city’s fantastically varied restaurant scene. Arts are largely centered around world-class museums like the Met and MoMA, theater hubs like Broadway, and performing arts complexes like the Lincoln Center. Pop culture has adopted many aspects of NYC’s life becoming world famous icons, including its ubiquitous subway system. Events in the city are some of the world’s most important, such as its Marathon and its Fashion Week.
New York’s attractions are related to its long history, which spans from its founding by the Dutch in 1626 as New Amsterdam to its modern position as one of the world’s main financial, commercial, fashion, media, entertainment, education, tech, health, and tourism centers. The city’s importance as a world center is stressed by the presence of the headquarters of the United Nations.
Overall, New York City is a fascinating destination and an exhilarating travel experience that caters to any traveler, ensuring a super-fast paced visit, but surely full of activities and definitely impossible to ever get old. 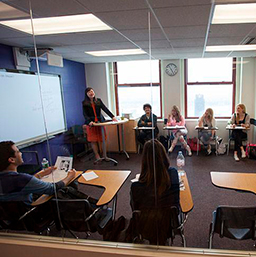 Kaplan New York Empire State Building is Kaplan’s iconic school on the 63rd floor of one of the most famous buildings in the world: the Empire State Building. Aside from absolutely incredible views, the School hosts students from over 80 different nationalities and lots of activities to bring them all together.

Best time to go is April to October.

The New York City Subway, the subway system with the most stations in the world, is also one of the very few that never closes at night.

Saturday Night Live, the longest running comedy show in the US, is open to the public, as long as tickets are acquired in advance.

Get up-close with some of the world’s top chefs during NYC Restaurant Week (one in Summer and one in Winter) paying just a fraction of their otherwise expensive menus.

The Statue of Liberty is located in the bay right in front of the city. It can be seen on a tour or for free, taking the Staten Island Ferry.


No visit to the city would be complete without watching a live show at one of the many theaters sprawling around Times Square.


Central Park, depicted in hundreds of movies and TV series, is a massive park designed for the leisure of New Yorkers.

The New York City Marathon, the world’s largest, is held the first Sunday of November and attracts almost 100,000 runners.


During the last days of November or the first of December, the entire country tunes in to watch the Christmas tree lighting ceremony at Rockefeller Center.


Memorial Day (last Monday of May) marks the official opening of the beaches and of the famed themed-parks in Coney Island.

There are countless shopping areas in New York City that are worth mentioning but the most famous, luxurious, expensive, crowded and filmed is Fifth Avenue in Midtown.

“I’m a filmmaker and photographer, and for this reason I chose the US to improve my experience with English. Now I clearly understand subway announcements and movies. Before the course, I always stopped when speaking but now I speak fluently.”

“The teachers are great; the staff is fantastic, and the building is probably one of the most famous in the world. If you are looking for a language school in NYC, this one is not only extremely good, but also absolutely fabulous.”